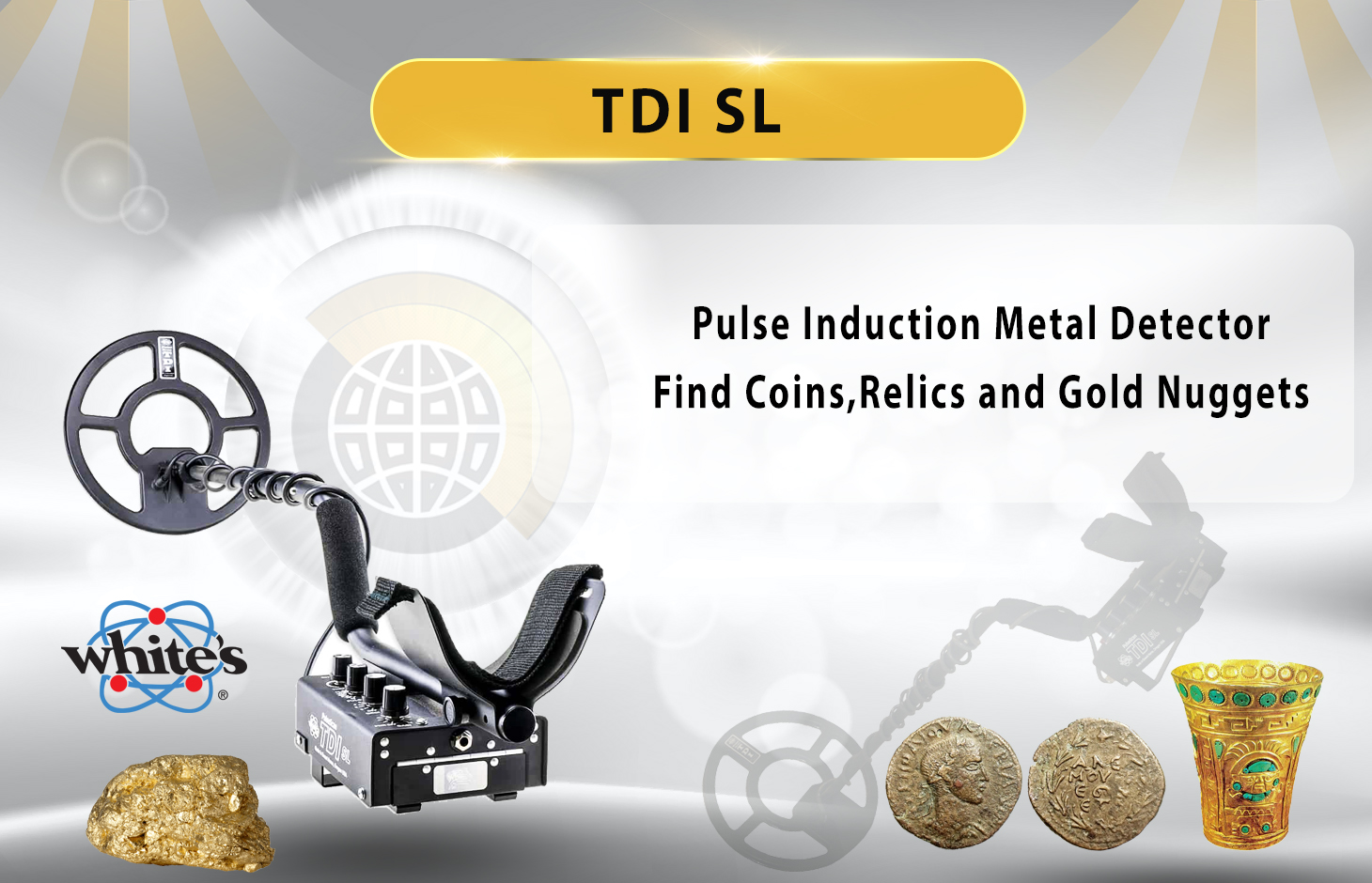 TDI SL metal detector is a special device from White’s,  it is a unique device for detecting gold and various precious and non-precious metals.

it is a unique device for detecting gold and various precious and non-precious metals.

and gives greater depth compared to other technologies.

to provide the prospector with a comfortable experience throughout the day

in the fields of search and beaches and in the parks.

as well as small metal objects such as rings as well as the discovery of buried gold treasures of ancient civilizations. 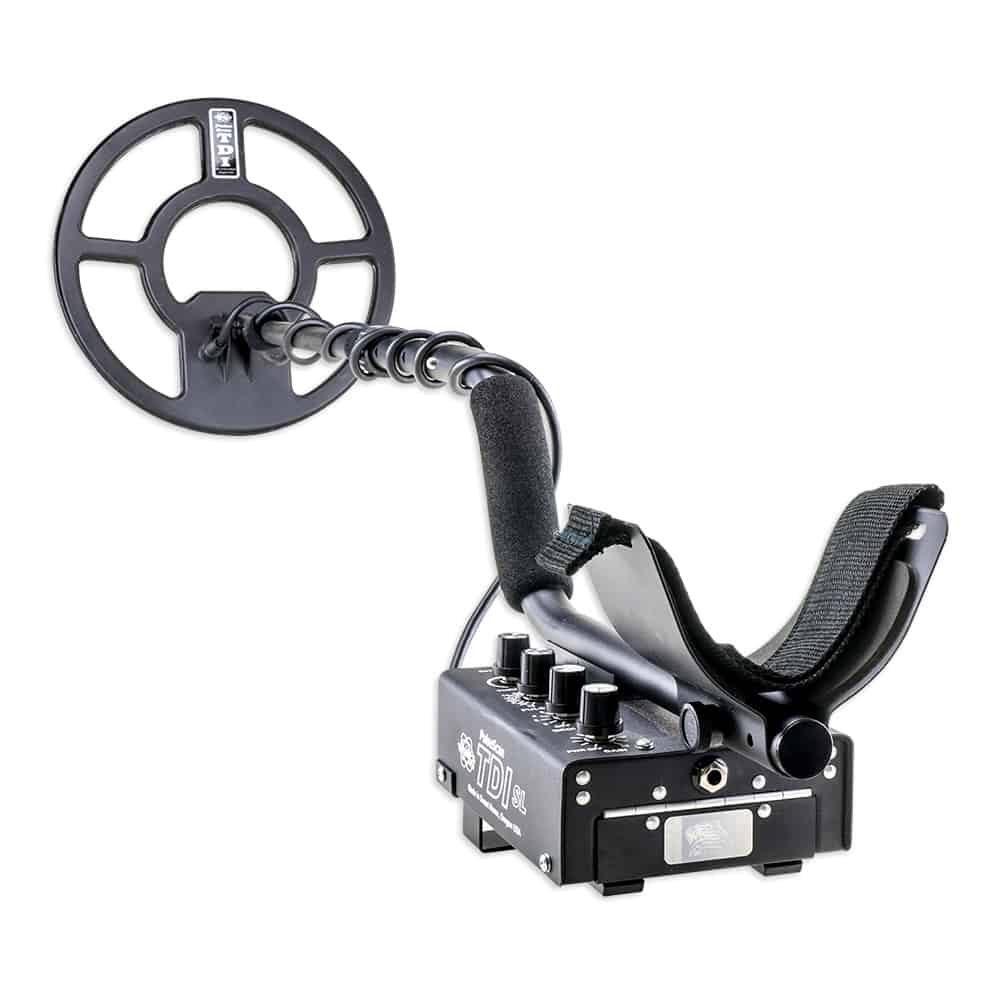 for achieving greater depth and better sensitivity than the common VLF technology.

When this pulse is fades away, the polar magnetic field reverses and suddenly collapses,

this electric current lasts for several microseconds (one millionth of a second) and causes an electrical current to flow through the coil.

This current is called the reflected pulse and lasts about 30 microseconds.

Then another pulse is sent and the process is repeated a number of times up to about 2600 beats per second in this device.

When this flow of pulses collides by a buried metal object such as a coin,

a magnetic field is generated in the metal body, the reflected pulses and the current passing through the coil are determined

by a metallic target and the user is alerted by sound tones.

while maintaining the depth provided by the use of pulse induction technology.

This is achieved using a differential technique where two of the dissolution samples are compared.

The ground balance is adjusted by adjusting the values ​​so that the two samples have the same response,

The metal targets that are lower than the value of the ground balance GB is positive response.

The targets above this point give a negative response. Both areas depend on the value of the electrical conductivity of the metal target.

This gives the device the possibility of distinguishing between the minerals. Note that in rare cases,

the target may be very close to the point of the ground balance and therefore does not produce any response or double audio response.

but with the loss of the ability to distinguish between metals with low electric conductivity or high electrical conductivity.

TDI SL includes a set of keys and buttons to control different settings:

It is used to control the volume of the audio tone

It is used to control the power level of the receiving signals. This knob key increases or decreases from 0 to 10 of the signal amplification value, and is used to turn the device on or off (when the value is 0)

This knob key allows control of the pulse delay time, which is the time period between two pulses, and the key values vary between 10 and 25 microseconds

Note that the function of this key is canceled in the case of making the value of the GB of the ground Off, and better to make the ground balance the value must be set to All Target

It is a circular key with 11 values (OFF to 11), which is used to manually control the value of the ground balance as explained previously

This key allows for a slight adjustment of the pulse rate of the coil and is used to reduce the effect of any electronic interference that may be caused by external electromagnetic sources, such as radio stations, microwave, shortwave or electrical fences such as in prisons, power lines, lighting, electric storms or other metal detectors used nearby.

With any conventional metal detection device, the search coil size selected with a trade between depth and sensitivity balance.

In short, the larger-sized coil gives greater depth to the larger targets but with a smaller sensitivity to the smaller metal targets.

In contrast, the smaller coil gives better sensitivity to the smaller objects but with less depth.

Gold nuggets can be detected by a metal detector from very small granules to a few hundred fines,

so a search coil that can provide depth and sensitivity would be ideal.

The first and largest is the external coil suitable for the most deep-seated targets,

while the inner and smaller one is more sensitive to the small objects.

As an example, a DF coil measuring 12 inches for outer coil and 6 inches for inner coil can capture very small gold nuggets

Also, the (7-inch -3.5-inch) coil is even better to pick up smaller gold nuggets while not sacrificing depth. 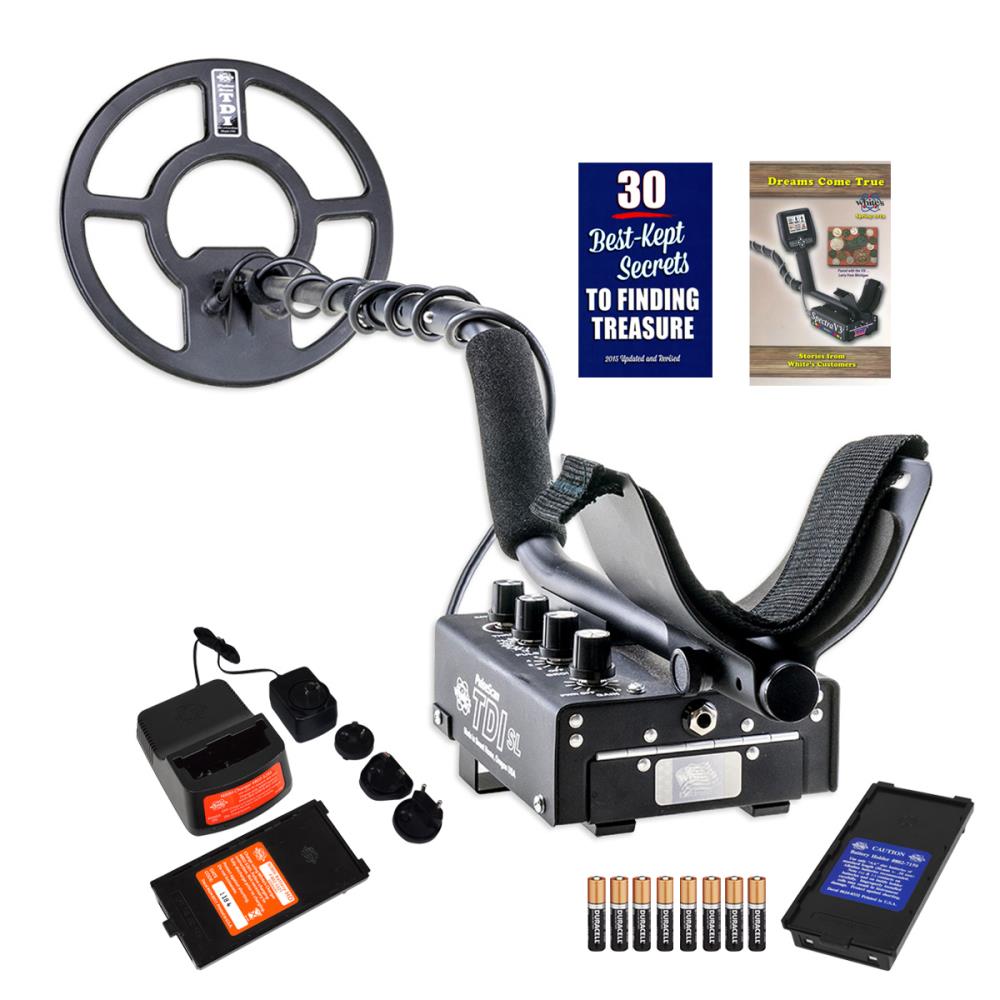 TDI SL metal detector is a special device from White's, it is a unique device for detecting gold and various precious and non-precious metals.